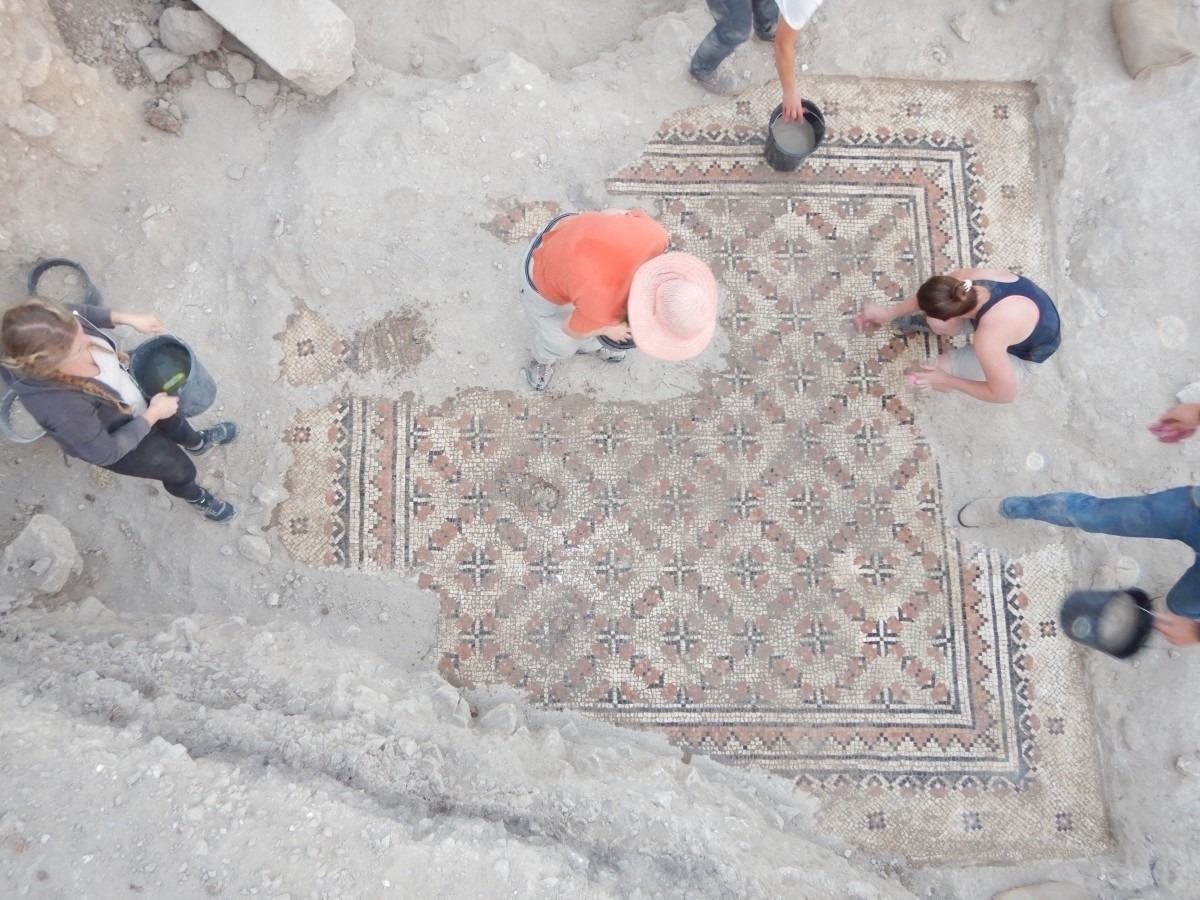 Today, the cemetery’s northern wall has been built on the artificially worked off rock scarp, following the same line that the former south-western fortification ran along for several periods throughout Jerusalems history. Above the wall and the rock-scarp, on the plateau of Mt Zion, the GPIA’s second area is located in the ‚Greek Garden‘. In this area, belonging to the Greek Orthodox Church, the GPIA started excavating with the permission of the Greek Orthodox Patriarch in 2017.

Below a soccer field built in the ’70s of the 20th century, the team discovered massive layers of debris in test trenches. The modern layers were removed with excavators. Once archaeological layers had been reached, the work continued with the help of volunteers. After removal of the modern layers, the team reaches massive mounds of mixed debris and waste, with finds ranging from Byzantine sherds and mosaic tiles to Mamluk and Osman material. To our surprise, most of the building material of the formerly rich Byzantine buildings uncovered below the debris and waste from later eras had been removed. Likely, the area fell into ruins after the disastrous earthquake of 747 AD and most movable materials have been used in later eras for the construction of nearby buildings, churches and walls. Testament of the what might have been a large villa or administrative building, are the worked-off bedrock, remains of plaster along the edges of walls and few remaining stones. These still allow a good reconstruction of the groundplan. The remains of three rooms and an open area have been uncovered. To compensate for irregular and sloping bedrock or older, unused water-basins, the ground had been levelled along the southern edge. Herodian-times ashlar has been used to build the terracing walls. Considering the bad state of preservation, the most surprising find is a well-preserved mosaic-covered floor in one of the rooms bordering the open area. The mosaic is built of rather large stone cubes in red, black and white. The pattern is repetitive featuring floral and geometric motives encompassed by several, differing bordering lines and an annexe in the door towards the east.
Several cisterns and basins are a testament of predominant water supply in historic Jerusalem by harvesting rainwater. One of the underground cistern hax been explored and found to extend all the way to the adjacent ‚Plot 29‘, a parcel of land owned by the neighbouring Dormition Abbey. In comparison with the structures excavated in Area I, the Protestant cemetery, the building uncovered in the ‚Greek Garden‘ is clearly larger and lacks any signs of the use of crafts.

Because of existing plans for the development of the area by the municipality of Jerusalem the excavation of the ‚Greek Garden had to be refilled‘. Those in the bordering ‚Protestant Cemetery‘ will be presented to the public as an archaeological park.