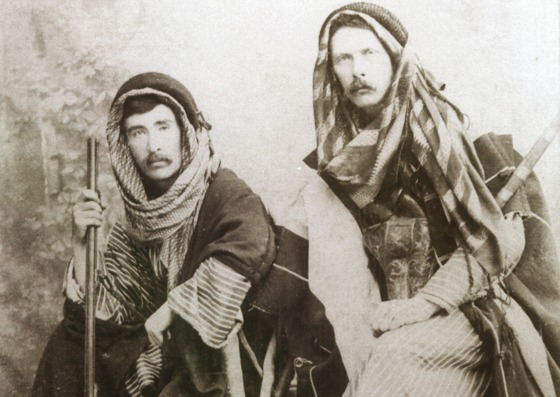 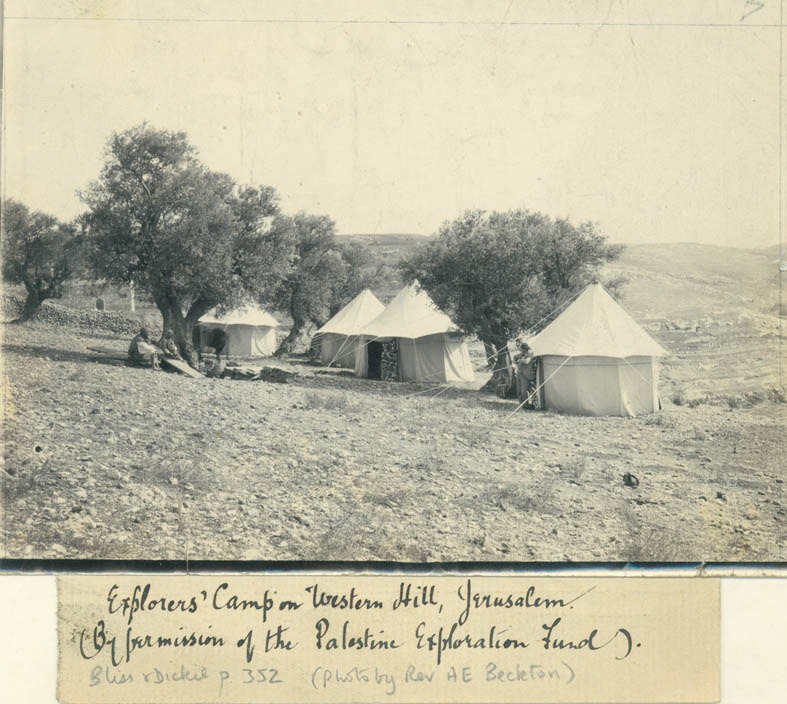 About half a century after the Anglican-Prussian cemetery was established near the Gobat-School, British archaeologists FREDERICK BLISS and ARCHIBALD DICKIE  conducted first excavations in this area on Mt. Zion. Between 1894 and 1897 they used tunnels to follow the ancient city-wall around the crest of Mount Zion. After they discovered the remains of a gate, BLISS and DICKIE opened a crater like pit towards the surface. In his early reports in the journal of the London based Palestine Exploration Fund, BLISS identified the gate as the long-lost ‚Gate of the Essenes‘ mentioned by Flavius Josephus (Bellum Iudaicum V, 145). Despite BLISS’s later hesitation, it seems his first assessment was quite correct, given the fact that Flavius Josephus provides topographic information supporting Bliss’s initial claim.
Flavius Josephus referred to places locations between the Hippikus tower and the eastward bend of the walls – the latrine of Betso and the ‚Gate of the Essenes‘. No traces of the latrine have been found to date. The location of the gate excavated by BLISS and DICKIE though, suggest it is plausible they indeed found the Gate of the Essenes.
Some year later, the cemetery was extended towards south-east – a wall was built to close off the excavation of BLISS and DICKIE, and a terrace was built over southern extent.

It took almost a century until the area attracted the interest of a Benedict Monk of the Dormitio-Abbey – P. BARGIL PIXNER.  PIXNER had established the idea of an Essene-quarter an mount Zion, based on the reports of BLISS and DICKIE and two nearby mikwaot that PIXNER attributed to the Essenes customs of cleansing. The excavations PIXNER executed between 1977 until 1988 were to support his claim. Consequently, his few published articles stood in the light of his theories, rather than archaeology. PIXNER mixed his unique interpretations of archaeological findings with a large number of literary sources to construct a history of the quarter of the Essenes. This quarter, he claimed, would have been founded during the Herodian era and it is here from where the first Jewish-Christian community originated. Because of his selective documentation, no thorough publication of the excavation exists, nor have many new sources resurfaced from the archives of the Dormition-Abbey or those of the Israel Antiquities Authority.
After PIXNER ended his excavations in 1988, some of the spoil was filled into the trenches again – the area was neglected, became overgrown and was used as a dump-site of the adjacent cemetery.

Nevertheless, the debate concerning the discoveries on Mt. Zion did not cease. While the claim of having excavated the Gate of the Essenes widely gained agreement, PIXNERs theory of a quarter of the Essenes was commonly dismissed. No excavations have been carried out in the area of PIXNERS digs since the late 80s. The structures that were enclosed by the city wall thus have never been examined in this area, meaning that theories concerning the quarter itself could not be evaluated.

During the 1980s and ‘90s there was a controversial discussion whether a pre-exilic wall extended to the slope of the Hinnom Valley, like the wall found by N. AVIGAD in the northern part of the Jewish quarter, dated by him to the end of the 8th century B. C. The excavation on the Protestant Cemetery by BARGIL PIXNER and the new nearby excavations in the south of the Khativat Yerushalayim by ZELINGER are relevant for this debate. According to PIXNER, the ancient wall found to the south-east of the “Lower Gate” can be ascribed to the pre-exilic period.